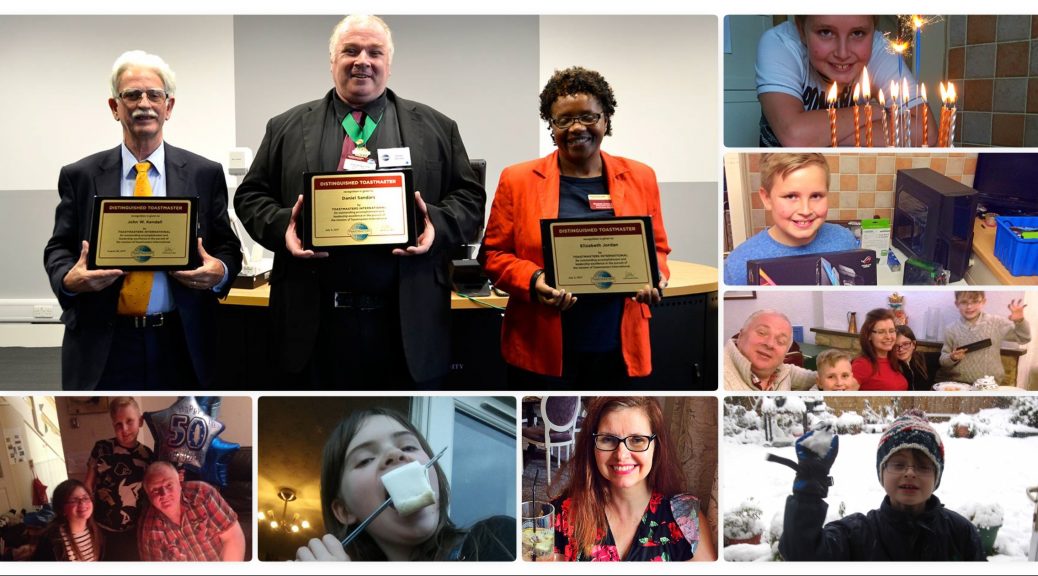 As we approach the end of 2017 the combined age of the household has passed 133 years old. The children surge through their pre-teen years whilst the parents settle down to being fifty somethings. We started the year with children at three schools but they are now at two with Cornelius leaving Tickford Park to join Lina at Ousedale on the other side of Newport Pagnell.  Samuel continues to attend Roman’s Field school in Milton Keynes and thrives there after a rocky start of arbitrarily declaring himself holidays.

The pre-teens are also growing up fast and becoming more independent and very much their own people.  The older two children now commute to school on foot semi-independently with their friends or not as the case maybe.  Lina and Cornelius also have new bicycles and house keys to give them additional options to get back into the house when Stephanie takes Sam out on his own or collects him. The children now all have mobile phones to help them stay in touch with us or more commonly to play games.

Culture wise, the children’s tastes are rapidly progressing. A year ago each new Beano comic was devoured as if by piranha fish. Now the Harry Potter and Hobbit phases have also peaked and we are moving on to Doctor Who and Star Wars.  Cornelius is still an avid reader of books by David Walliams, whilst Lina seems very into Derek Landy’s “Skullduggery Pleasant” Series. Samuel loves reading books to himself, especially the very interactive “We are all going on a bear hunt” by Michael Rosen and Helen Oxenbury.

Broadband, Digital TV and Computers have all had major upgrades over the year. The children now each have a personal computer to help them log into school to do homework assignments… or more commonly to play games and keep up to date with game players on YouTube. Lina and Cornelius’s computers, as well as Dad’s computer, were built and rebuilt at home with Lina and Cornelius all helping choose what they wanted and more importantly what they wanted it to look like (something out of Star Wars with lots of lights and special effects!). The computers are very capable and will hopefully last through to university.

On the holidays front Lina and Cornelius both enjoyed fabulous trips out to Jersey and Gozo with the cousins and granny.  As a family we went on further adventures out to the Cotswolds camping and to Norfolk in a Chalet.  It was a revelation that we could get so organized and travel so lightly and bodes well for future possibilities now that Samuel takes part more.

We all have varied extra curricula activates with Lina into Ice skating and reading, Cornelius into Taekwondo and cartoon drawing, Samuel into train spotting and recording his own video reviews of computer games, and mum and dad involved in the public speaking (not weddings) group Toastmasters International. After a year or so of getting comfortable at North Bucks speakers Stephanie gave her debut speech and won the best speaker award that night.  Daniel had a busy year with the leadership aspects of Toastmasters and won the election to become a Division director in July helping support 350 members in 16 clubs organized in three Areas covering a patch from Peterborough down to the M25 and from Milton Keynes to Cambridge. In amongst that Daniel advanced his own public speaking to attain the Distinguished Toastmaster, the highest educational award.

In the autumn Daniel was able to make it to a Family gathering in Hampshire for his Uncle Hugh and Aunt Sue’s Golden Wedding anniversary. It was a great day for all the cousins to catch up and helped galvanize a much needed overall of the family history website. Hopefully, this will pave the way for us to upload new content as it becomes available. That wasn’t the only website that Daniel tackled this year as he became involved with rebuilding a neglected one for the local Toastmasters clubs and discovered a hack attack!

The New Year will offer us exciting new flexibility with more family adventure possibilities and Lina and Cornelius able to explore more autonomously.  Daniel has his plate full at work with his time 140% booked with an exciting new project involving the Welsh Government and rural policy.  With Toastmasters Stephanie hopes to deliver her second speech which will be about Picasso, whilst Daniel needs to balance his future commitments with doing more things further away from desk work that help get him fitter