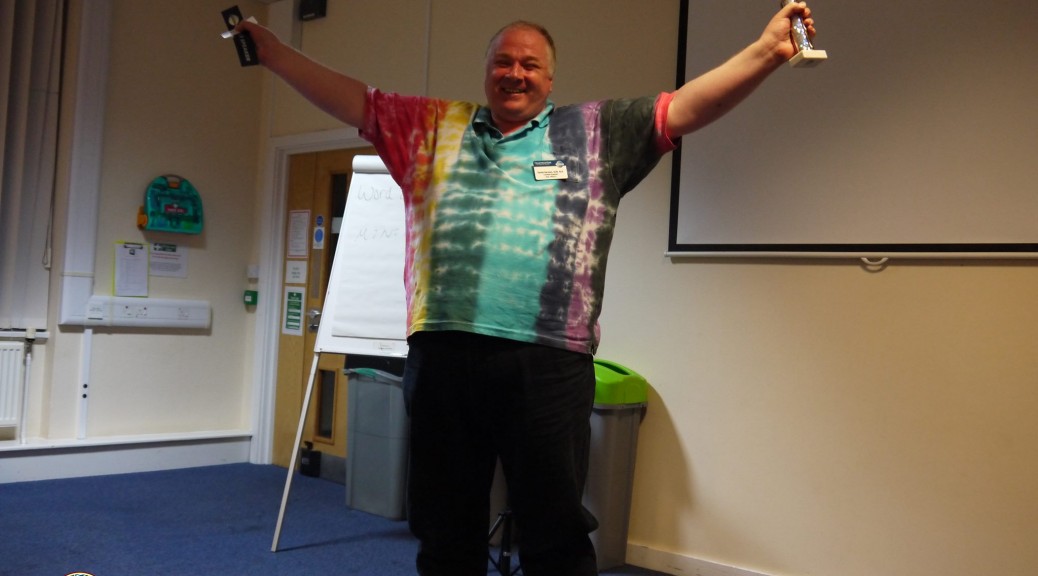 I joined Cranfield Speakers in September 2011 to get regular practice at presentations and to improve. I kept renewing because I also valued the non-singles scene social connection it provides as well as the regular pleasure of achieving recognized bite-sized speaking and leadership challenges. I am also a charter member and former club mentor of Northampton Speakers. Last year I coordinated the highly successful delivery of a Speechcraft program to ten doctoral students at Cranfield University. When travelling with work I try to visit clubs in the Europe and have taken part in meetings in Malta, Bilbao, and Copenhagen. Currently, I serve as District 71 Speechcraft Chair and Area Director of G44. I’ve one more speech and the balance of my service as Area Director before I earn my Distinguished Toastmaster (DTM).

Please see appendixes for further information on my Toastmaster track record and awards.

Professionally, I am an Operational Researcher (Management Scientist) employed as a Research Fellow at Cranfield University where I specialise in decisions and quantitative policy analysis in the agricultural and environmental sectors. My degrees are in Agriculture (Seale-Hayne College), Applied Environmental Science (Wye College), and Operational Research (University of Hertfordshire).  Rumour has it that it all started when I was two as I took to hanging out with the oldest farmer in our village as we both walked at the same speed checking the cattle in the fields.

My wife Stephanie and I live nearby in Newport Pagnell along with our three pre-teen children and James Bond’s carmaker Aston Martin. In the years prior to the arrival of our first born my wife and I were active proponents of the Blues partner dancing scene and organised a series of dances and workshops in Bedfordshire.

What makes me the ideal candidate for the role?

I remember the member and want all to thrive, going far beyond the minimum to support all. I form strong working networks with my peers by tailoring and approach using multiple media and communication channels. To this I can readily combine Toastmaster experience, an analytic approach to data and management, and strong Information Technology skills to gain valuable insights and leverage on decisions transfer knowledge, and produce strong public relations. A recent example was mapping out Division G realignment scenarios including some related work on accessibility via public transport and the weighted travel time centres of each division concept.

Why do I want the role?

I want to carry on my Toastmasters journey with the Toastmasters that I am increasingly getting to know as we square up to the emerging opportunities of Pathways and the communities and industries of the East of England. I enjoy Toastmastering and the opportunities to tackle well supported bite-sized leadership challenges that make a difference to members.

If you were elected, what would be your key actions in the role?

Leadership is about creating a whole that is greater than the sum of its parts. That is the only justification for it! In this context, it will be important to stimulate fellowship and joint educational or social events. This is especially important between the areas and divisions that are involved in realignment around Cambridge and beyond. Next year the 31 clubs of the current Division G should well have the support and synergies of the resources of two Division Directors and their combined leverage in obtaining keynote speakers and strategic opportunities.

All members and their clubs will be well placed to thrive and capitalise on the opportunities of Pathways by ensuring that they are well supported by their Area Directors and the resources of the District and Toastmasters International. A regular schedule of Division Council meetings will be a cornerstone of communication and the flow of expertise and enthusiasm towards the members.

In the longer term the Division will flourish only if the next generations of leaders and new offerings ‘clubs’ to the public are nurtured. The key to this is partly identifying and supporting emerging talent as well as leading from the front and absorbing some of the risks and challenging work that goes into new endeavours. The way to do this is to recognize and judiciously get involved with public relation drives, club growth opportunities, and to create leadership roles to support the Division’s mission and conferences.