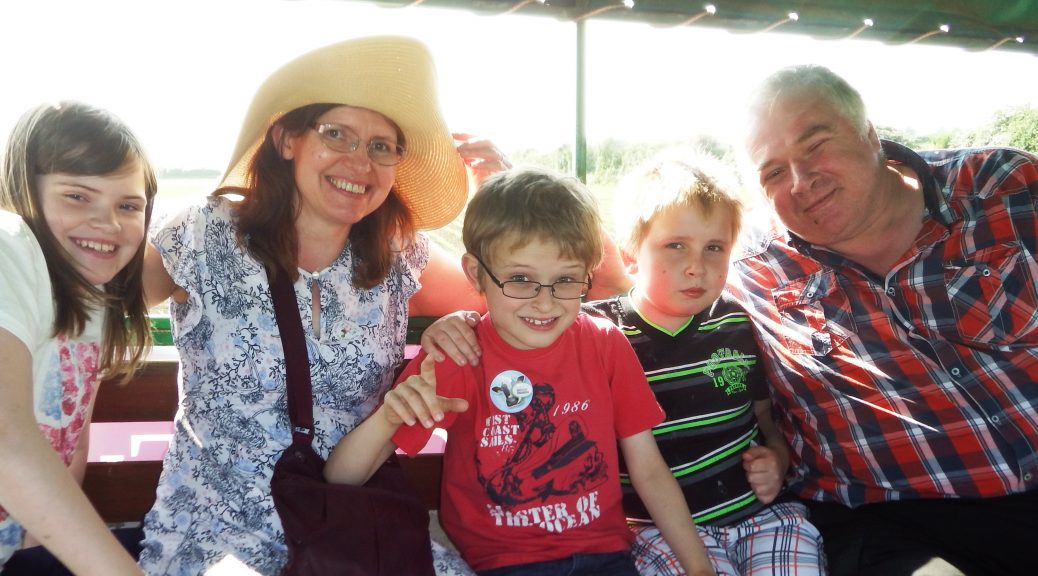 We continue to settle into 2 Blythe Close where we enjoy the extra space and proximity to schools. More so since Aunty Antonia visited and reorganised half of the kitchen into the nearest dump or charity shop!

At the University Daniel has continued to work on developing methods and researching the environmental benefits and burdens of cattle, greener pig production, dairy farming systems, and smart phone applications for vets. A second branch of work looks at the impact of climate change scenarios on future land use and agriculture in Europe. Two presentations he gave this year were very rewarding. The first was being asked to speak about his profession and work to pre A-Level students in Milton Keynes on behalf of the Operational Research Society. The second saw him getting a sitting ovation (before lunch) for a scientific presentation at the Potsdam Institute of Climate Change on a stage once shared by the Prince of Wales.

Stephanie is finding life more manageable now that Samuel is in a special school and is collected in the mornings and brought home just after 4pm. Samuel and Cornelius are getting on enough for Stephanie to be in a different room and continue with housework although Samuel is still high functioning and is exhausting to hear and watch as he bounces from one activity to another and hardly sits down. Stephanie’s mother Eileen and Samuel’s respite worker Caitlin are a great bonus to a smoother family life.

Lina had a very special year this year with her graduation from Tickford Park Primary School, and move up to Ousedale School. New school meant new found independence as she and her friends commute across town on foot, complete with mobile phones and house keys. They allow enough time to play in the parks and invent games involving fast moving swings, eight foot high seesaws that move around and up and down, and picking bottles up with one’s feet. In additional to book reading, crazy experiments, and creative projects, Lina’s latest passion is ice skating where she has progressed along the training scale towards bronze, silver, and gold levels. A very special treat at the beginning of the year was having an interior designer (Granny) giving her bedroom a makeover. As soon as the makeover was complete Ben, a 3 ft high cuddly bunny, moved in and made himself at home with all of us.

Cornelius crossed into double digits (10 years old) and moved from Green uniform to final year Burgundy uniform at Tickford Park Primary School this year.  He has progressively become more confident cycling and this autumn got a new ‘big’ bike. Cornelius is also becoming a very adept cartoonist developing characters and storylines for the computer game he has yet to learn how to program. Taekwondo has recently become a very useful energy output for him and he has steady made his way towards yellow & green belt this December.

Samuel is definitely making his way in this world, but not always the way other people expect. He changed school this year from Tickford Park Primary to Roman’s Field Primary. There are only 50 pupils in the entire school with almost as many teachers and assistants. It has wonderful opportunities for spontaneous and timetabled physical and creative activities around an academic curriculum that is adapted to each child. Samuel did well as Father Christmas in his school play. Digital gadgets are a passion of his and he is now using mum and dad’s smart phones to record videos of his reviews of the latest apps he has downloaded for his adventures in Minecraft worlds in character as ‘Danger Fip’ or in real-life with ‘Grim’ his large toy Panda bear.

Lina and Cornelius have both travelled with Granny, Aunty Antonia, and Uncle Ben to enjoy some fabulous time with their cousins in Malta and Jersey.  Samuel and Daddy went on a big adventure by boat to bring Lina and Cornelius home from Jersey in February. Samuel was marvellous, but Lina is not yet convinced Daddy can be excused from bring them home across the Bay of Biscay, in a boat, during a violent storm, to end up in a port very very many miles from where the car was parked. Another major travelling achievement was our first camping trip with Samuel that went very well despite our deep reservations about him panicking at nocturnal insects and not having four walls and lockable doors to delineate where he could wander/run.

Daniel’s major side interest is with the public speaking, communication and leadership organization Toastmasters International. His achievements this year include progressing to Advance Communicator Silver and delivering an amazing Speechcraft educational programme to 10 University doctoral students which earned him the Leadership Excellence Award. In June Daniel stepped down from the Presidency of the Cranfield Speakers Club and steppede up to become the Area G44 Director of Cranfield and four other clubs. As Area Director Daniel gets to travel and for the first time went to the District Conference, held in Dublin, with the Area’s two competitors. It was an eye opening experience listening to presentations from top speakers, including a world champion of Public Speaking, seeing his Area’s members placed very well in their contests, and collecting an award on behalf of his predecessor.

Stephanie divides her free time between Modern-Jive dancing every 4 weeks or so and being a member of the local Toastmasters International’ club the North Bucks Speakers meeting twice a month. We choose contrasting clubs and nights off to allow us to babysit for each other, an arrangement Lina and Cornelius love when ‘soft’ touch Daddy is on duty. Stephanie delivered hermaiden 3-5 minute ‘icebreaker’ speech and won best speaker with it and a month later best impromptu speaker. Previously, Stephanie had been a member of the debating group at British Junior Chamber and has clearly benefited from the experience.

Have a fantastic festive season and a happy New Year. Love From Team Sandars