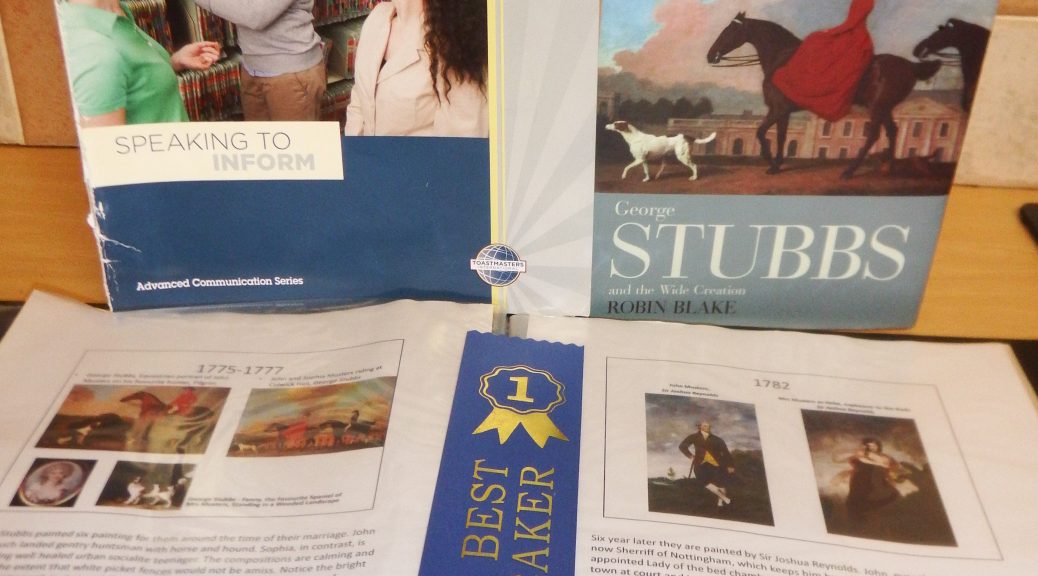 Presentation at audience’s level of knowledge; Major points supported by explanation, examples and information gathered in research; At least one visual aid effectively used to enhance the audience’s understanding.

2016-10-17 Meet the Ancestors: Speaking to Inform, resources for informing from Daniel Sandars

We all have a great fascination with the lives and struggles of others, often with a touch of Schadenfreude –a pleasure from the suffering of others. The Celebrity gossip industry is worth over 3 billion dollars and 60% of us consciously consume it.

Tonight, Toastmaster, fellow Toastmasters and most welcome guests I am going to share a few pieces of art of my 6th great Grandparents John and Sophia Musters from Colwick Hall in South Nottinghamshire. Art tells more about their marriage than I know about my Parent’s own marriage in contemporary times.

George Stubbs painted six paintings for them around the time of their marriage. John is very much landed gentry huntsman with horse and hound. Sophia, in contrast, is the ravishing well healed urban socialite teenager. The compositions are calming and refined to the extent that white picket fences would not be amiss. Notice the bright red of the huntsman’s jacket and the Sophia’s riding dress define the centre of attention. Sophia looks out on the world, but John looks only on her. Each of the Stubbs might cost £50,000 in today’s money, which is rather a lot to spend on a snapshot of the dog, even if spaniels were fashionable accessories for ladies! If you take the way he looks at his wife and the painting of her pet it suggest he could be Uxorious – devoted or obsessed with his wife and her happiness. Remember the painting of them riding as a couple as I will come back to that

Six years later they are painted by Sir Joshua Reynolds. John, ever the rural squire is now Sherriff of Nottingham, which keeps him busy in the sticks. Sophia has been appointed Lady of the bed chamber to Queen Charlotte and was the toast of the town at court and in London. Notice the contrast between the compositions country v classics! Note the energy is the storm clouds – winds of change? This is three years after their last child, who dies within two months. Those three years were a tough patch for Sophia battling being rundown, depressed, and bored and was sent to the Bath spas to recover. Notice Sophia’s generously exposed bust, the wind tearing at her scarf, hair, and clothes, and the hand feeding of an Eagle. In symbology what does and Eagle often represent? Remember Hebe we will come back to her.

Recall the Stubbs painting of John and Sophia riding together. For 150 years that wasn’t the case. In 1936 restorers discovered her painted out and restored the original composition. In the 1980s x-ray analysis proved she had been over painted as the Reverend Phillip Storey, but to keep the storey that one was not restored. It is believed that Stubbs himself was instructed to remove her. He took care to ensure his original work could be restored. Was this a case of 18th Century photo-shopping by a badly hurt husband?

There are two original Reynold’s Hebe paintings with only subtle differences of clouds and wind. A powerful secret admirer had Reynolds get the first Hebe back from the Family for his private pleasure. Reynolds did recall the painting on the pretext of finishing touches and handed it over. He passed it off as theft and refunding the monies to John Musters. The rumours and clouded circumstances of the loss of the painting tipped John over the edge and for a time John and Sophia became estranged. To add to the cheek of it Reynolds produces the second paining for his pleasure and exhibits it in 1785 at the Royal Academy, taking the risk that John Musters never comes to London and nobody tells him anything either! What is more it was not just one secret admired it was many with names like the Prince of Wales (hint Eagle), the politician Penistone Lamb and Reynolds himself. She was in demand and between them George Romney, John Hoopner, and Reynolds painted her around 10 times, before you count the etchings and prints. She made men happy if not by the lusciousness of her flesh then with the sensuousness of her painted flesh glowing on their canvases. At 55 grand a shot she was a very expensive pin-up girl going on playboy centrefold!

They did get back together and Sophia returned to Colwick with one of the Hebe paintings! However, I wonder if John Musters is having the last laugh with her fantastical memorial. The statue depicts Resignation sitting on the rock of ages by Westmorcroft. It brings out the virginal rather than the vampish qualities and makes the statement that despite the afflictions of real life we can be resigned to the will of God.  The carvings are her gifts of art, dance, and music. The epitaph is interesting.

If truth; if goodness, charity, and grace,
Can in Heaven’s holy record find a place,
Thy name, Sophia, with an angel’s pen,
Is traced on leaves of bliss by saintly men

The first two phrases make it seem like a long shot to get into Heaven’s records, but the case exists. The last phrase is cryptic. Leaves are numerous and short lived, Bliss is rapture, and men are just numerous and perhaps held in good standing. To the end John was clearly uxorious, but affectionately ‘resigned’ to her true nature.

In conclusion I am in awe of the creative artist’s ability not just to capture the moment, like a photographer, but to tell the story of it. To sum up John and Sophia it seems, in the words of Blues man Son House, “Ain’t but one kind of Blues and that consists of the male and female that is in Love”

Personally, I thought the concept of honing into the audience using the ubiquitous love of gossip and scandal worked. I had more buy-in from more people than I can remember before.

I really had a great time refreshing this family story and exploring it further. I had taken the significance of art as communication in family history completely for granted until now. My appreciation of my six times great grandparents has grown for the better.