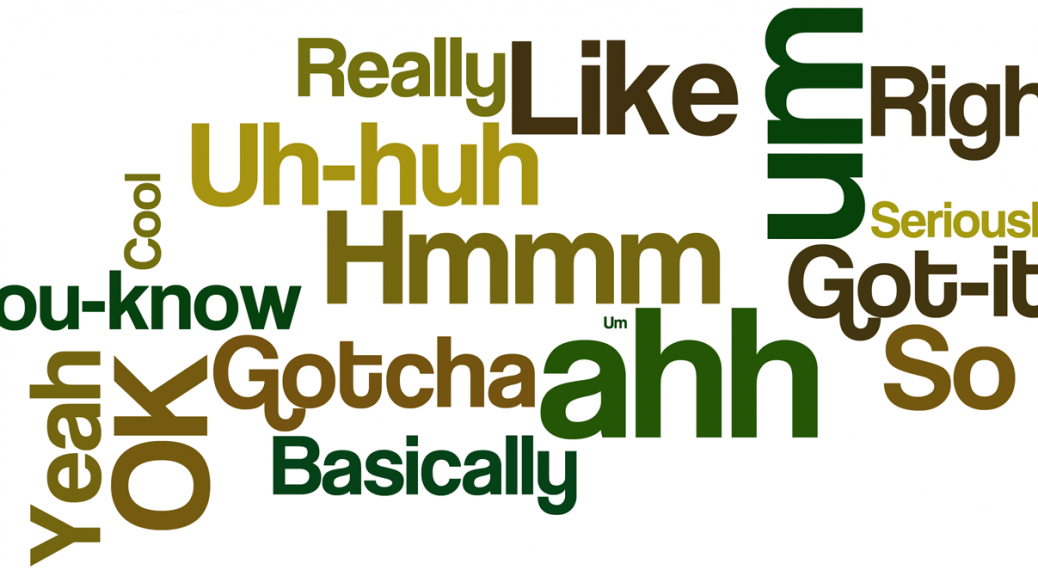 Good fun last night and sit back and just listen to a meeting rather than help deliver it.

I was grunt counter and found the ah counter form very useful to structure my listening. I did notice the usual ah..umm..err, but also dragged word like “soooooooooooooo we all need to stop over thinking”, which under pressure can sound like a misfiring phrase “soooooooooo SO we need to all stop overthinking” a crisp pause would be better. The notorious and self fulfilling ” without further ado” crept in.

Speech disfluencies have also become important in recent years with the advent of speech-to-text programs and other attempts at enabling computers to make sense of human speech.

Recent linguistic research has suggested that non-pathological disfluencies may contain a variety of meaning; the frequency of “uh” and “um” in English is often reflective of a speaker’s alertness or emotional state. Some have hypothesized that the time of an “uh” or “um” is used for the planning of future words; other researchers have suggested that they are actually to be understood as full-fledged function words rather than accidents, indicating a delay of variable time in which the speaker wishes to pause without voluntarily yielding control of the dialogue. There is some debate as to whether to consider them a form of noise or as a meaning-filled part of language.

Research in computational linguistics has revealed a correlation between native language and patterns of disfluencies in spontaneously uttered speech.[3] In addition to this research, there are other subjective accounts reported by individuals. According to one commentator[who?], Americans use pauses such as “um” or “em,” the British say “uh” or “eh”, the French use “euh”, the Germans say “äh” (pronounced eh or er), the Dutch use “eh”, Japanese use “ā”, “anō” or “ēto”, and Spanish speakers say “ehhh” (also used in Hebrew), “como” (normally meaning ‘like’), and, in Latin America but not Spain, “este” (normally meaning ‘this’). Besides “er” and “uh”, the Portuguese use “hã” or “é”. In Mandarin, “那个(nà gè)” and “这个(zhè ge)” are used, meaning “that” or “this”, respectively. In Bosnian, Serbian and Croatian, speakers vocalize an “ovaj”, “onaj” or “to jest” (‘this’, ‘that’ and ‘that is’.) Arabic speakers say “يعني”, the pronunciation of which is close to “yaa’ni”, [jæʕni] or [jaʕni], (literally, “he means”, there being no grammatically gender-neutral third person) and in Turkish, they say “şey” in addition to “yani” (without the [ʕ] found in Arabic) and “ııı”.[citation needed] A more complete list can be found on the fillers article.

Fillers are parts of speech which are not generally recognized as purposeful or containing formal meaning, usually expressed as pauses such as uh, like and er, but also extending to repairs (“He was wearing a black—uh, I mean a blue, a blue shirt”), and articulation problems such as stuttering. Use is normally frowned upon in mass media such as news reports or films, but they occur regularly in everyday conversation, sometimes representing upwards of 20% of “words” in conversation.[2] Fillers can also be used as a pause for thought (“I arrived at, um—3 o’clock”).

A speech disfluency, also spelled speech dysfluency, is any of various breaks, irregularities (within the English language, similar speech dysfluency occurs in different forms in other languages), or non-lexical vocables that occurs within the flow of otherwise fluent speech. These include false starts, i.e. words and sentences that are cut off mid-utterance, phrases that are restarted or repeated and repeated syllables, fillers i.e. grunts or non-lexical utterances such as “huh”, “uh”, “erm”, “um”, “well” and “like”, and repaired utterances, i.e. instances of speakers correcting their own slips of the tongue or mispronunciations (before anyone else gets a chance to). “Huh” is claimed to be a universal syllable.[1]