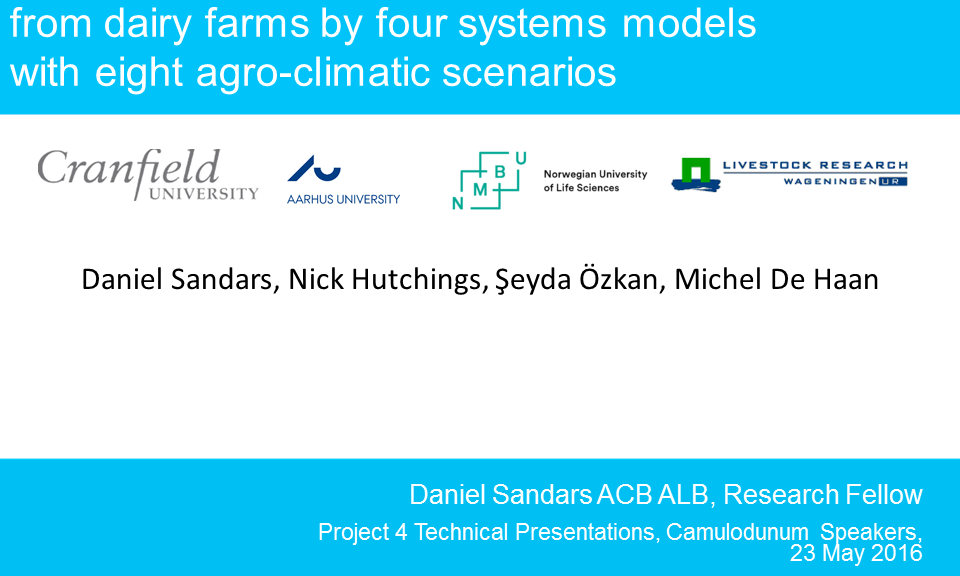 Note to the Evaluator

For this project, the speaker was asked to present a technical paper or article. The opening should contain a clear description of the problem or process being discussed. Only a few major points should be included. The conclusion should contain a summary of the paper s conclusions, and any recommendations that arise. The speaker should use a conversational speaking style, and has been asked to illustrate his/her message with a flipchart, overhead projector or 35mm slides. It is suggested you read this entire project before hearing the speech. In addition to your oral evaluation, please write answers to the questions below. Where appropriate, offer specific suggestions for improvement.

Have you heard of the business saying “What gets measured gets managed”? It is a slightly comic take on business guru Peter Drucker’s quote that “If you can’t measure it then you can’t manage it”

We have international treaty obligations to manage greenhouse gas emissions. Dairy farming contributes 2-4% to national emissions and represents nearly 30% of all agricultural emissions.

The snag with this worldview is that the greenhouse emissions from dairy farms are prohibitively expensive to measure given their wide scale and diffuse nature. However, farm systems-modelling enables us to estimate those emissions and also the impact of management action to mitigate emissions. Dairy farms are interesting case because they are fairly closed systems which grow their own fodder and recycle their own manure.

Across Europe various teams have developed dairy farm systems-models. The disparate nature of this modelling community meant European policy makers and stakeholders were getting mixed messages making it hard to develop policy and gain political support. One solution is MACSUR is a European knowledge hub that brings together the modelling community by supplying networking funding to aid information flow, collaboration and model comparisons.

We have defined a standard scenario that includes the size of farm, the yield of milk at a standard quality and the inputs of manufactured fertilizers. We have chosen Netherlands and Northern Spain as contrasting climate zones with different grazing seasons and crop yield. We have chosen sand and clay as contrasting soils and we have all grass or grass and forage maize as contrasting cropping systems. These create eight distinct agro-climatic scenarios. The models are otherwise free with respect to stocking rates, diets, manure management, and land usage.

What I want to do Toastmaster, fellow Toastmasters and most welcome guests is to tell you firstly about the finding, then talk about our experiences of conducting the study, before finally an introducing an idea to enhance to utility of model comparisons.

The results are expressed as a carbon footprint of carbon dioxide equivalents which is a common measure of the global warming potential of carbon dioxide, methane and nitrous oxide. Nitrous oxide is 298 time more potent than fossil carbon dioxide. In agriculture most of the carbon that is circulating is from natural turnover so we concentrate on that which is from fossil fuel.

What we found when we did the model comparisons is that all four models broadly agreed in their predictions of total greenhouse gas emissions. This chart shows all four models alongside each other comparing the two climates, the two soils and the two cropping systems. They are expressed per kilo of standardized energy corrected milk.

At 1 kg of carbon dioxide equivalent milk creates two fifths of the global warming potential as a litre of petrol or leaving your computer on for 30 hours.

However, the devil is in the detail! The major source of emissions arises from the methane produced within the rumen of the cow. There is good agreement here.

If we next consider how the storage of manures then we see more differences. Methane is the dominant gas, and three models suggest there will be less produced in the warm climate.

The manures are applied to land where crops are grown and this can be a source of nitrous oxide loss either directly or indirect via nitrogen lost as nitrate leaching or as ammonia. The direct losses of nitrous oxide from fields are the second most important contribution to the farm’s greenhouse gas emissions. The models tend to agree on the order of magnitude but differ in detail.

Showing that we can, by collaborative networking reach unequivocal outcomes adds credence to the mission of FACCE JPI and the knowledge hubs. However our finding do not include off farm life-cycle costs such as the energy used in the manufacture of fertilizers.

Additionally, it should be noted that we have not had the resources to be able to compare our predictions from Spain with measured greenhouse gas emissions.

It has taken considerable iterative work to reveal the assumptions each team was making in modelling the scenarios and in identifying and interpreting data from agro-climatic zones outside of one’s own domain. In predicting greenhouse gas emissions from agricultural activities we are aided by the consistent methods of the Intergovernmental Panel on Climate Change. It could be argued that in choosing models from four countries in Northwest Europe that we are working with models with a small intellectual gene pool, but then this area is the heart of dairy farming in Europe and thus model development.

I think we have also shown the importance of the 6th sense in modelling and interpreting data. The system that we constructed from the case we are less familiar with showed alarming nitrogen balances. Grass could be depositing nitrogen and maize mining it from another field entirely!

An idea we have is that we can adopt ensemble modelling to get more out of model comparison. With four models we can triangulate towards predicting one average robust estimate and information on the spread of results around it. We can identify where to target mitigation, where to be more cautious, and where best to improve systems modelling. Good model candidates will allow the key management actions to be decision inputs/ outputs rather than constraints constructed into the model.

To sum up! The comparison exercise has shown that all models agree well in predicting total greenhouse gas emissions. However, this headline masks that the models do have large difference when predicting some of the individual greenhouse gas components, but we have some consistency where it counts, such as enteric methane production. Field nitrous oxide production is the second most important component and one where the models do disagree.

I’ll change perspective by analogy. An ensemble is like a marriage. Marriage might not be the problem, but the marrying with the wrong reasons is! As with marriage close communication is vital to share scientific and technical knowledge and ideas. In the words of one husband “Of course I communicate darling, I sent you an email with a revised marriage mission statement.”

I delivered this talk at Camulodunum Speakers on the 23rd May and was evaluated by Paul Mitchell.

Abstract: Farm systems modelling is an important tool to quantify and understanding the impacts of management decisions on farm productivity and environmental burdens, such as greenhouse gas emissions.  The inter-comparison exercise involved four models, were SFARMOD (a rural land-use allocation Linear Programming model developed in the United Kingdom), DairyWise (an empirical model simulating technical, environmental and financial processes on a dairy farm in the Netherlands), FarmAC (a simplified carbon- and nitrogen-flow-based model used in Denmark), and HolosNor (a tool building on the Intergovernmental Panel on Climate Change Tier 2 methodology). Data from two climatically contrasting regions of Europe were used to represent contemporary conditions (Netherlands) and a proxy for climate change (Northern Spain). The eight scenarios compared were based on two soil types (sandy or clayey), two cropping systems (grass or grass and maize), and two climate types (cool or warm and wetter). Standard values were employed for land area (50 ha), milk yield (7000 kg Energy Corrected Milk/head/year) and nitrogen fertiliser rates (275 kg N and 150 kg N/ha/year for grass and maize, respectively). Profit is maximized (SFARMMOD) and as far as possible concentrate feed resources were grown on the farm with no export/import of forages or manure.

The DairyWise model predicted a higher utilisation of feed for milk production than the other models and so a higher stock density. However, predicted emission intensity varied little between models, from 0.98 to 1.02 carbon dioxide equivalents (kg milk)-1, corresponding to a variation of about ±5%. This similarity disguised much larger variations in the underlying sources. For the two largest sources (enteric methane and soil nitrous oxide), which accounted for on average 55% and 26% of the total GHG emissions respectively, the variation about the ensemble mean was -11 to 9% and -16 to 13%. The differences and limitations of the inter-comparison are discussed and ways forward are suggested.

FACCE MACSUR is organized as a Knowledge Hub, a new financial and organizational instrument. The novelty of MACSUR lies in the in-kind contributions of 2 million euros which, in addition to the 6 million euros of new money, contribute to facilitating the convergence of already funded and ongoing research, as well as funding new research [financial figures refer to the period 1 June 2012 – 31 May 2015 and were established on preliminary accounting data]. The project includes currently 70 institutions from 18 countries. Activities are funded by national agencies, with the amount of funds and the regulation of their use governed at the national level.

The Knowledge Hub FACCE MACSUR brings together the excellence of research in modelling grasslands, livestock, crops, farms, and agricultural trade in order to improve the modelling of climate change impacts on European agriculture and in order to illustrate to political decision makers how climate will affect regional farming systems and food production in Europe. To achieve this goal, MACSUR engages in a range of activities, including methodological comparisons of models and use of their outputs (scaling, uncertainty), linking of complementary models from different sectors, involvement of stakeholders, training of young scientists, and establishing a community of practice across a broad range of scientific disciplines. The five-year project started in June 2012.