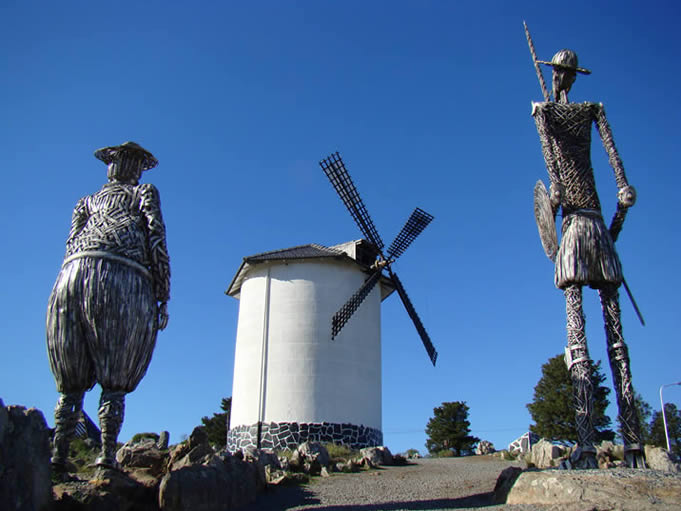 The Novel Don Quixote by Miguel Cervantes is written in early 17th Century Spain and follows the adventures of a nameless squire who reads so many chivalric romances that he loses his marbles and decides to set out to revive chivalry, undo wrongs, and bring justice to the world, under the name Don Quixote. He is accompanied by the hapless husband of his housekeeper Sancho Panza, and his mouth eaten old horse Roxinante.

These are not his only companions as there is also his muse, the imaginary Dulcinea, his nemesis, the imaginary sage El Sabio Freston, and, in this adventure, the mythical Briareus with 50 heads and 100 arms.

I’ve taken this from a 18th Century translation by Tobias Smollet and I chose it  because with middle age creeping up one never knows when the next adventure is just around the corner!

Volume I Book I Chapter VIII

Of the happy success of the valiant Don Quixote, and the Dreadful and inconceivable adventure of the wind-mills, with other incidents worthy to be recorded by the most able historian.

In the midst of this their conversation, they discovered thirty or forty wind-mills all together on the plain, which the knight no sooner perceived, than he said to his squire, “Chance has conducted our affairs even better than we could wish or hope for; look there, friend Sancho, and behold thirty or forty outrageous giants, with whom, I intend to engage in battle, and put every soul of them to death, so that we may begin to enrich ourselves with their spoils; for, it is meritorious warfare, and serviceable both to God and man to extirpate such a wicked race from the face of the earth.“ “What giants do you mean?“ said Sancho Panza in amaze? “Those you see yonder, replies his master, with vast extended arms; some of which are nearly two leagues long.” “I would your worship would take notice, replied Sancho, that those you see yonder are no giants, but wind-mills; and what seem arms to you, are sails; which being turned with the wind, make the mill stone work: “ “It seems very plain, said the knight, that you are but a novice in adventures: these I affirm to be giants; and if  thou art afraid, get out of the reach of danger, and put up thy prayers for me, while I join with them in fierce and unequal combat.” So saying, he put spurs to his steed Roxinante, without paying least regard to the cries of his squire Sancho, who assured him,  that those he was going to attack were no giants, but innocent wind-mills: but he was so much possessed with the opinion that they were giants, the he neither heard the advice of his squire Sancho, nor would use the intelligence of his own eyes,  thou he was very near them: on the contrary, when he approached them, he called aloud, “Fly not, ye base and cowardly miscreants, for, he is but a single knight who now attacks you.” At that instant, a breeze of wind springing up, the great sails began to turn; which being perceived by Don Quixote, “Tho’ you wield, said he, more arms than ever belonged to the giant Briareus, I will make you pay for your insolence.” So saying, he heartily recommended himself to his lady Dulcinea, whom he implored to succour him in this emergency, bracing on his target, and setting his lance in the rest, he put his Rozinante to full speed, and assaulting the nearest windmill, thrust it into one of the sails, which was drove about by the wind with so much fury, that the lance was shivered to pieces, and both knight and steer whirled aloft, and overthrown in very bad plight upon the plain.

Sancho Panza rode as fast as the ass could carry him to his assistance, and when he came up, found him unable to stir, by reason of the bruises which he and Rozinante had received. “Lord have mercy upon us! said the squire did not I tell your worship to consider well what you were about? did not I assure you, they were no other than wind-mills? indeed no body could mistake them for any thing else, but one who has wind-mills in his own head!“ “prithee, hold thy peace, friend Sancho, replied Don Quixote; the affairs of war, are more than any thing, subject to change. How much more so I believe, nay, am certain, that the sage Freston, who stole my closet and books, has converted those giants into mills, in order to rob me of the honour of their overthrow; such is the enmity he bears me; but, in the end, all his treacherous arts will be little avail against the vigour of my sword.” “God’s will be done! replied Sancho Panza, who helped him to rise, and mount Rozinante that was almost disjointed.

On the good side I gave as fabulous introduction. Generally, I succeeded in conveying the audience to the story. Vocal variety and body language worked well to help captivate people. The timing was just 2 seconds shy of the 8 minute minimum.

Under the dim concealed lighting I struggled to read my script and that detracted from the overall message.  The recommendations were for a higher lectern, larger font, better lighting and even consider reading a story from an armchair. On turning the page I repeated part of a sentence so need to prepare a script that breaks cleanly across pages. Another recommendation was that it was good that I had started to introduce different voices as well as emotions for the different character and that could be developed more.

At one stage in the preparations I was dreading having picked a difficult piece in archaic English and broadly failing to get it memorised effectively. However, I was once again reminded of how Toastmaster finds the Good in what you do and support you for greater and better. I was amazed how my Motivation flipped from dread to enthusiasm over the evening. Viva Toastmasters

Interpretive reading is a challenge I took on because it was out of my comfort zone. It was clear that it was, but I gave it a good run for the money and am glad to have launched this manual. I am glad I chose Don Quixote because it would have been harder with a piece that bored me no matter how easy.

Next stop is to read a poem and I will probably do that at an open mic night for the aspirant bards of Northampton. Following that I am doing a mono-drama, then a play and then an oratorical speech.

Original text can be found here on Google Books: A clip of a partial narration

A film clip in Spanish of the scene