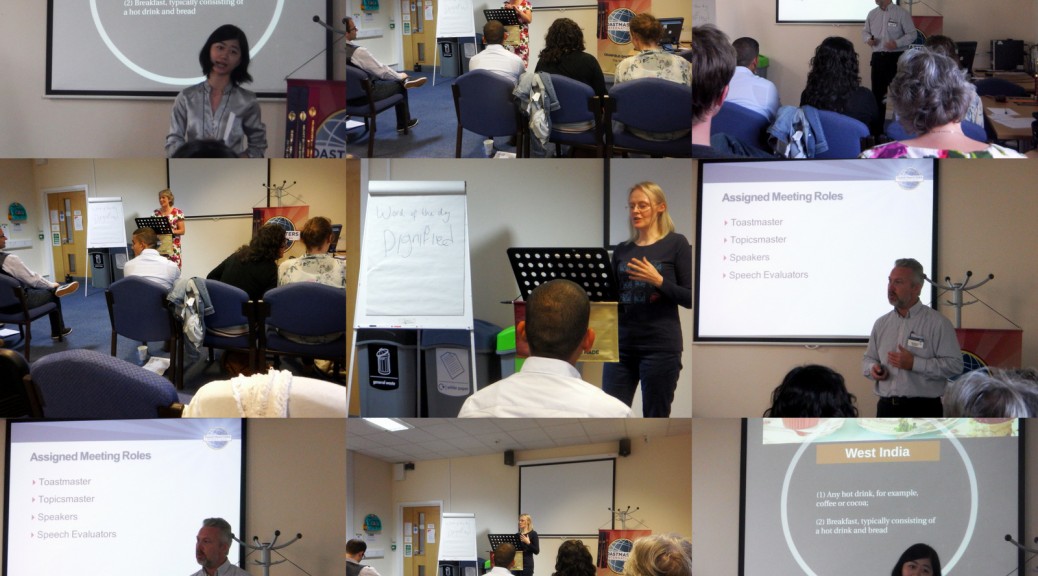 A full on night at Cranfield Speakers (#CranfieldSpeakers) club.

Alex was the Toastmaster of the Evening and lead us through a program of two speeches and two educational speeches. He ran with a theme of the Georgian era. One of the educational speeches, on Motivating people, from Paul J fulfilled the requirements for his Advanced Leader Bronze (ALB). So well done that man! Overall four really solid speakers with Minjie delivering a very accomplished Prezi aided eighth project from her competent communicator manual on research into Tea drinking. She scooped the Smooth-talker, Best-speaker, General Evaluator’s Award and Best use of Humour.

I doubled up roles and did a last minute Joke.  The graduates reunion at the Red Lion in Uxbridge (found in the Readers Digest). They meet every decade and every time choose the Read Lion at Uxbridge:

I also did table topics and the tried the power of four words tactic using  text on the Georgian era.  It went down well. They had to make up a story using all four key words. We had all sorts of stories:

We were joined by five guests, two of whom were doctoral students seeking help from Cranfield Speakers to run a Speechcraft course for a group of eight students.

Speechcraft is a structured 6-8 session Toastmasters community outreach course that  provides a Toastmaster microcosm to nurture people through the core foundations of oral communication skills. The club were generally supportive of the idea that we consider running the Speechcraft program if we can to the extent that several indicated that they would find time to help.

Again a  very busy meeting as people getting into mastering their briefs and squaring up to the autumn programme of contests and freshers fairs.  key take outs: