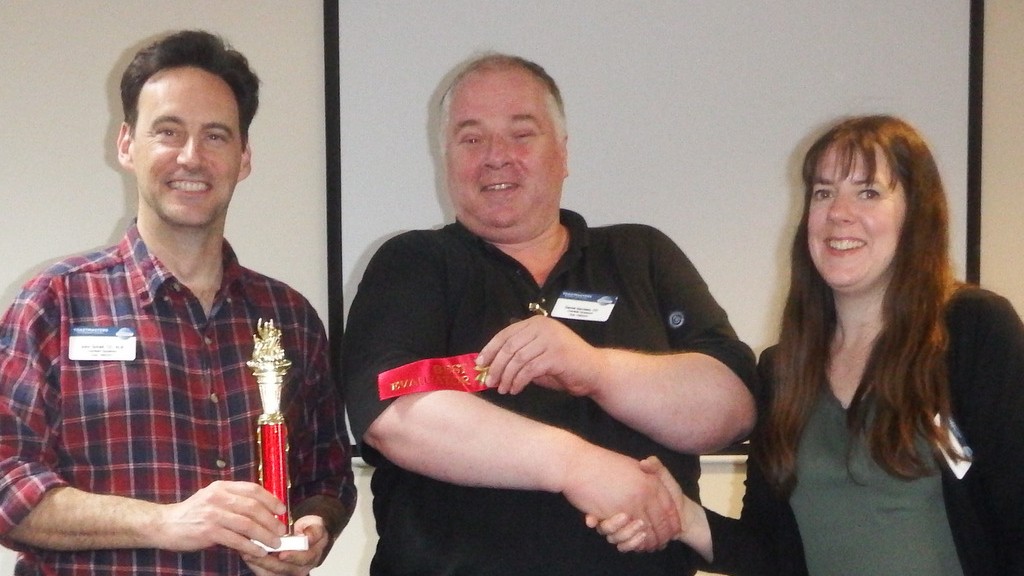 I found this Evaluation of an Advanced manual project very stimulating and educational. The speaker was John who is a seasoned member of Toastmasters and Cranfield Speakers. John took joint Best Speaker Award and I took joint Best Evaluator.

First something about John’s task

Objectives: a) Discuss the three ideas generated in Project 2 [The Brian Storming Project], and b) Determine which one best resolves the problem.

John set the scene well by explaining that Cranfield Speakers is a community club (rather than a corporate or college club) and needs to maintain a balance between students who turnover quite quickly and longer term members from the wider community and faculty staff.

One thing that I really liked was that John remained centre stage as the chair and thus control of the discussion kept returning to him which enabled him to 1) develop the questioning to flesh out the ideas, 2) engage others in the room (by the end 80% had contributed), and 3) maintain a constructive safe positive atmosphere and limit any inhibitory judgmental nay saying from creeping in.

In addition John was able to move to hear the quieter members speak and paraphrased, summarized and structured the replies so all could hear and see, on a flip chart, how the discussion was advancing.

As ideas were developed John kept a neutral professional tone, which went along way to preserving his neutrality as a facilitator. However, it seems to be very hard not to let your own preferences creep across in choice of vocabulary. For example, on hearing “word of mouth” as an idea he added “power of” when paraphrasing back to the room.

Towards the end as John focused the room down towards making a choice he tried to get us each to conceptualize the choices in terms of  us as individuals having to sacrifice free time and make the effort to enact each of the choices. This was important as the audience were not all particularly invested a stakeholders in the future of the club or of running it.  Otherwise it is too easy to say everything is a good idea and should be done (implying someone else does it).

Were things would have worked better was to have done the previous brainstorming activity instead of launching straight in with this topic. In the end the discussion did not get to a decision making vote largely because the time was taken up brainstorming to develop ideas. The lesson to learn is the amount of time it takes to get the room switched onto the question in hand develop ideas and move towards a decision. It may even be ideal to have time between idea generation and debating a decision to allow for private reflective thinking. Moving to a decision and facilitating that might be an awful lot tougher if the participants are very heavily emotionally, politically, financially invested into the alternative decisions

Overall it was an enjoyable and constructive exercise and the room identified 1) radio/webinars, and 2) stalls/events at fayres as good ‘one off’ ideas to develop. Presentations to business and associations were one potentially good idea but we saw no immediate ‘targets’. There were also ongoing ideas like a greater presence of professional ‘social’ media such as LinkedIn and word of mouth networking. Hopefully, at subsequent meetings of the executive committee some of these ideas might develop and move forward.