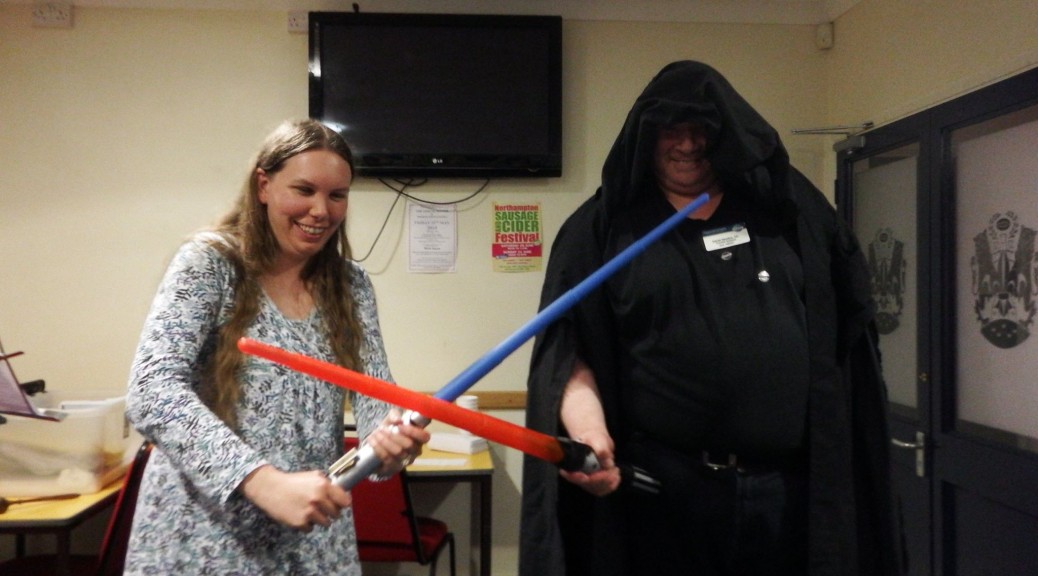 Business and government officials sometime are asked to be spokespersons for their organizations, commenting on various issues. During a press conference you give a prepared speech on the issue and then field questions from journalists. Make sure you are familiar with all the available information about the issue. Answer all questions in a positive manner, speak in sound bites, remain calm, and conclude the conference with a positive statement.

“A Statement on behalf of the Galactic Empire”

The Death Star is the size of a typical moon with a diameter of 160 km. They have a crew of a million and their principal armament is a super laser capable of destroying any target by accelerating dispersing the bulk of its mass into hyperspace as little more than rubble.

The Death Star Class of battle station are the result of an 18 year cutting edge research and development effort that has cost over one quadrillion dollars. They a major piece of the Imperial Navy re-equipment program which currently represents 47% of the Imperial budget.

This program is the largest project for scientific, technology, engineering, and mathematical communities for thousands of generation. Imperial Navy vessels are equipped with three quarters of all sub-atomic high energy power and propulsion systems.

Construction has been subcontracted to leading construction yards on over 900 different worlds bringing much needed economic stimulation and jobs throughout the Galactic Empire. Grand Moff Wilhuff Tarkin said “With the Death Star completed, the [Imperial Navy] must take vigorous action against the Rebels as soon as possible. The Emperor expects great things of this battle station.”

The Emperor does indeed expect great things as he is equipping the Imperial Navy not just for today’s wars with the Rebel Alliance, but for future conflict. Already the Empire has come into contact with scout group of being from beyond the Empire whose technology and aggression, we had, until today,few weapons with which to defend ourselves.

Despite these many features the primary role of the Death Star Battle stations is one of deterrence. The deterrence policy arises from the Tarkin doctrine. Increasingly our enemies grow bolder and no longer have a healthy respect for the power of traditional arms. The Galactic Empire cannot afford the manpower and cost of the vast conventional forces that would be necessary to defend ourselves against all threats.

The planet Alderaan has recently been identified as the central safe haven through which the Rebel Alliance gains high level strategic, financial, and political support. Following today’s test firing Darth Vader, of the Emperor’s office, said “The defence systems on Alderaan, despite the Senator’s protestations to the contrary, were as strong as any in the Empire. I should conclude that our demonstration was as impressive as it was thorough.”

“I’ve heard there is a weakness in the exhaust ports?” I can’t possible engage in speculation

“I’ve heard that it takes too long to recharge after a firing?” Imperial scientist and engineers are constantly researching better technologies to upgrade the Death Stars

“If the Imperial navy has 47% of the budget what has been cut?” Nothing has been cut as taxation has been used. “If taxes have been raised what happens to those that struggle to pay?” Those that cannot pay are taken to work for the Empire’s Industrial corps. They receive board and lodging together with a job for life and free funeral arrangements

“Given 900 construction yards on 900 worlds each with their own health safety legislation how did you ensure compliance” The 900 yards are compliant with us –[that is the Emperor and the Empires legislation].

I had struggled to get this off the ground due to cancelled meetings and bronchitis. I had originally pitched it at the relocation and subsequent closure of the friends of Delapre Abbey tea rooms by the Council. However, that all got over taken by time and the meeting theme of star wars gave me an excuse for a rethink. I was commended for fitting in so well with the meeting theme and providing a refreshing ‘unorthodox’ speech.

I enjoyed dressing up and getting into role for this hard sell. The feed back was that I held the company line well with authority, poise and presence if with too many facts. The ‘soundness’ of my facts on the engineering science of the Death Star was lightly queried by a Star Wars fan who had been down the red carpet at the world premiere of the first prequel.

The residual susceptibility to dry throated-ness from the winter bronchitis played out well as a rasping Darth Vader but a water bottle would help and provide and excuse to pause as my central point sink home.

The analogies between my PR of the Death star and the current politics of defence and strategic weapon systems was spotted and commended.

One recommendation that I should pick up on was a lack of Sith Lord ruthlessness especially in opening to Toastmasters rather than the Imperial press corps.