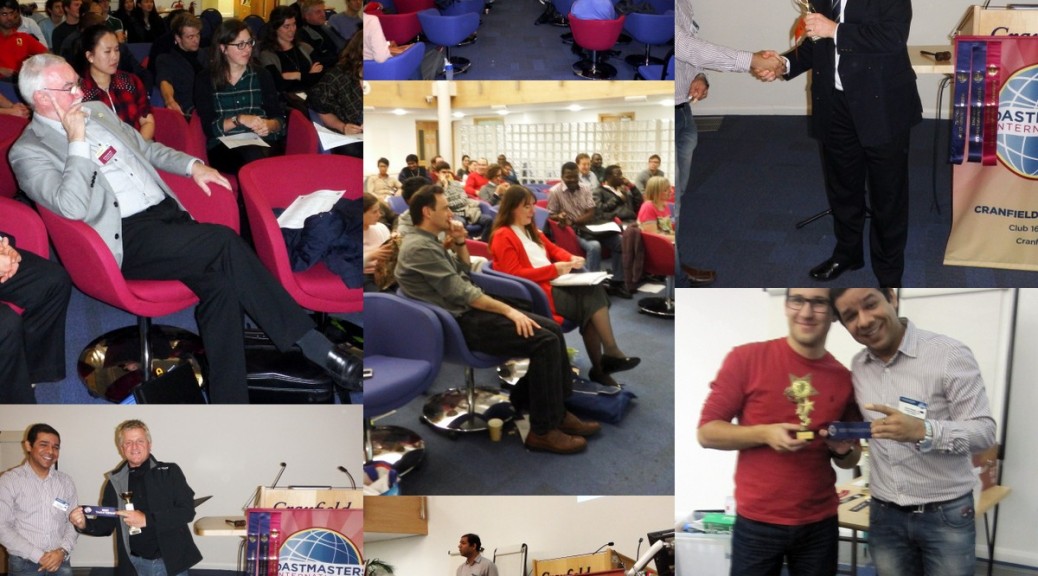 I was Toastmaster of the Evening for one of the big nights in Cranfield Speakers’ year.  The Open Demonstration Event is for the benefit of the new intake of students. This year it coincided with the 90th Anniversary of the first meeting of Toastmasters. We did really well attracting over 60 people. Given that some people left early to catch buses we retained 52 right to the end.

Overall the membership were well motivated to come forward for roles from an early stage. As Toastmaster of the Evening (TME) it does help to have the extra hype of a special event to get good engagement and a strong agenda.

Wow we did really well attracting somewhere between 70 and 80 people to the CMRI gallery, a venue that we rarely use.  The Open Demonstration Event is timed for the new intake of students. This year it coincided with the 90th Anniversary of the first meeting of Toastmasters.

Well done to the winners who were guest Ian (Table-topics), Humour (Andy), and Evaluator (Gustavo)

Andy’s joke was the tale of three male hitchhikers stuck trying to cross a wild river. They each prayed and asked for gifts and were granted them. One had the strength to swim across and one had the skills and equipment to row across. The one that asked for intelligence was transformed into a woman with a map and processed to walk across the river using the bridge a little further downstream.

The grammarian Vicky proposed word of the day “Passion”.

The Table-topics session was lead by Jim and based on mystery items from his garage that the speakers had to say why they had invented them.  The Pointy bit was Becky’s back scratcher. The bendy brush thing was Ian’s Saxophone cleaner mark 1. The strappy whip thing was Jin’s bundle securing strap. And finally the hoop with rollers was Maria dress making ribbon dispenser. Paul W evaluated the session.

Gustavo introduced our first speaker Minjie who gave a talk entitled “A Brief History of Mastering Toast…ies”. This talk was drawn from the Competent Communication Manual – 4 – How to Say It. It was fascinating to discover the power of words and why we are known as Toastmasters not Suschimasters or Noodlemasters.

Minije launched the club’s new promotional video that she has been the videographer and producer of.

Allison introduced his mentor and our second speaker John who gave a talk entitled “A Brief History of the Mercedes-Benz”. It was fun hearing a comical parody of the life and times of the engineer Gottleib Daimler and savvy marketer Karl Benz

Many thanks to those in leadership roles. Becky was the General Evaluator as well as covering her brief as the Vice President of Education. Minjie opened as Sargent at Arms.  Timekeeping was done by Matt the Timekeeper, Sunday counted ‘Ahs’ and Vicky was Grammarian. Maria lead the night in the hospitality role.  The club President Atma presided over the meeting.

The organization grew out of a single club, Smedley Chapter One Club, which would become the first Toastmasters club. It was founded by Ralph C. Smedley on October 22, 1924, at the YMCA in Santa Ana, California, United States. Since 1924, Toastmasters has served over four million people, and today the organization serves over 313,000 members in 126 countries, through its over 14,650 member clubs. Through its thousands of member clubs, Toastmasters International offers a program of communication and leadership projects designed to help people learn the arts of speaking, listening, and thinking.

Scotland was the first district to be organised outside the USA in 1946. By 1958 30 countries outside the US had toastmasters clubs and by 1962 the educational materials had been translated in to English, French and Braille.  Toastmasters was truly multinational and multilingual. In 1977 Edith Bungay was the first blind person to become the World Champion of Public Speaking.

Cranfield Speakers’ Club was established as Toastmasters club 1682231 in February 2011. Membership is open to anyone and includes a mix of students, staff, and faculty of Cranfield University, as well as many local residents not affiliated with the university.