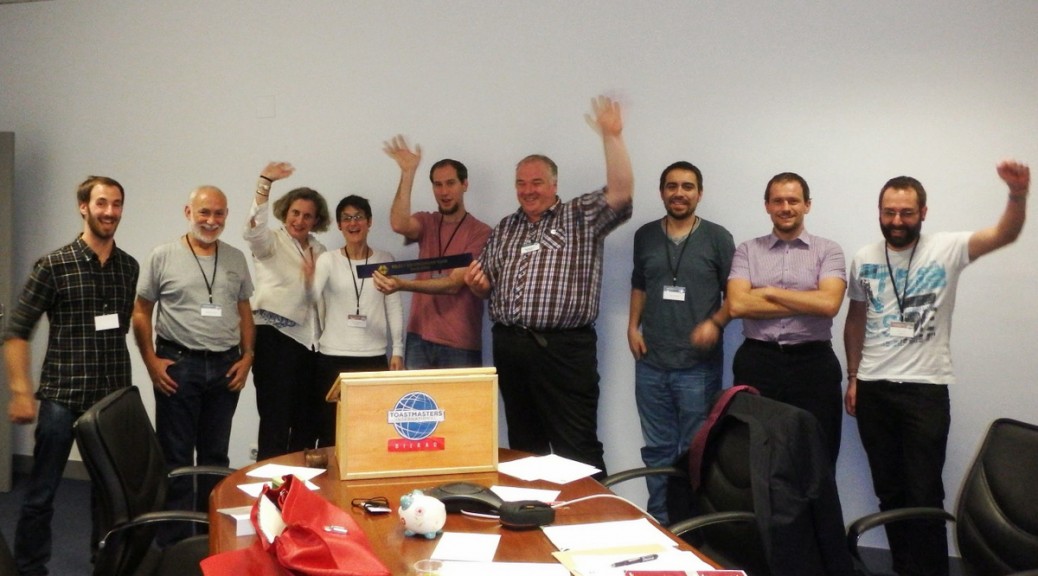 On the 16th of October I had the great fortune of being able to sneak a visit to toastmasters Bilbao on the end of a business trip. Bilbao is located in the Northern Atlantic mountains of Spain facing the bay of Biscay in the area we know as the Basque Country. This was my first visit to the area and it is very very different from visiting the Costa Blanca or Andalucia. It is green with pastoral farming.

It was a fun meeting with seven members, one guest and me, a visiting Toastmaster. They meet weekly and have a much short agenda of 90 minutes built around one main speaker and a round robin and a impromptu table topics sessions. The venue, the Edificio Metrolade, made for a really intimate, friendly and effective meeting.

I had a really warm welcome from the president Fernando and his team. They personally made sure I had my connecting taxi to the airport given that it was still 12 km away and last check-in was within 40-50 minutes.

The main speaker was Amaia who spoke about how strange a world would be without sound. She created many descriptive word picture of everyday situation. For example, dances without music, and rock concerts without noise.  The speech re-introduced introduced sound as music for the final slide of a Spanish guitarist (for the benefit of the English guest). This talk was developed for the fourth project, entitled how to say it, of the Competent Communicator manual

Toastmaster of the Meeting

Victor did a really good job as the Toastmaster of the Meeting.  I was really impressed with early and helpfully he liaised with me via the easy-speak system on the Districts 59 & 95 website (http://bilbao.tmclub.eu). It was good to see that the club had laid on such a positive agenda with all the main roles filled.

The table-topics session that was laid on by Xabier was a real eye opener.  It had several phases and lasted 45 minutes.

He developed the club’s tip of the week into an educational round robin activity. This week’s tip was on structuring the body of a talk.  He gave four example methods:

Each person was given a speech planning template That had sections:

From a list of topics the room were invited to chose one and spend five minutes preparing their plan. At the end of that everyone had 1-2 minutes to stand up and present their now planned table-topics speech and justify their approach.

I chose the “the appearance of the internet” and adopted a problem solution approach because I could never remember the date to justify a chronological one.

Following the round robin phase the remaining time was used for three impromptu speakers. Although there was no balloting for a best table-topic speaker award or an evaluator.

I liked this approach as it was inclusive and educational, which could well be a very motivational factor in a club that has only 4-5 planned main speeches a month.

As general Evaluator my team consisted of Fernando as speech evaluator, Blanca as timekeeper and Benjamin as Grammarian and Ah counter. They did a really effective job. The word of the day was Drawback. It was a very small drawback that from the lecturn it was invisible and facing the audience. Benjamin did a first class job feeding back about ah counting and grammar without appearing critical of anyone in particular.  Fernando gave an effective evaluation of Amaia’s speech and my recommendation is to end on a concise and motivational summary to leave the speaker with a uplifting take home messages.

Promotional Club Video based on the visit

Xabier proved to be very busy with his iPhone in his role as Vice President of Public Relation. Within three days he had produced a promotional video of the meeting that conveys a lot of the atmosphere and dynamics. That was all a pleasant surprise. See below.