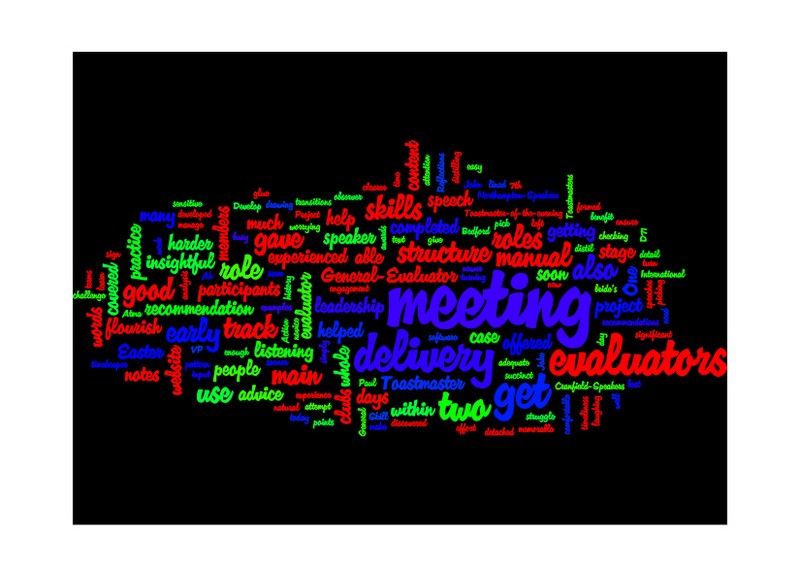 This was a busy night with 18 participants turning out within two days of the Easter break.

The General Evaluator evaluates the evaluators, and in the case of Cranfield Speakers the meeting as a whole. As I discovered recently some clubs have a separate meeting evaluator as is the case at Bedford and Northampton Speakers. see http://www.toastmasters.org/Members/MemberExperience/MeetingRoles/GE.aspx

We had two novice evaluators, Maria and Minjie, who both did a very good job at listening and insightful analysis and delivered that in an effective structure by summarising the speech and drawing out significant commendations and positive recommendations. It was a really good sign that they have both moved beyond simply giving purely descriptive summaries to offering insightful advice. The main improvement with practice is delivery by distilling their notes to succinct points and relaxing rather than worrying about detail.
The two more experienced evaluators, John and Andy, gave text book command performances of content structure and delivery. They both could have developed a second recommendation and would also benefit by being in role soon and getting to know the speaker to be able to introduce the speaker as well as the speech.

The meeting as a whole.

The VP Education, Atma, covered the additional roles of Jokemaster, sergeant at arms and time keeper. I gave him the General Evaluators awards because his experience helped glue the meeting together and allow other people the platform from which to learn and flourish.

The Joke was that laughter may be the best medicine, but not when you are laughing at your new bride’s mistakes.

The Toastmaster of the Evening, Amani, arrived early and that helped the meeting start on time and in an organised fashion. For a first attempt timeliness and organisation sets a good precedence. The main recommendation is to use, at an early stage, the meeting management software on the D71 website as that will help make it much clearer about how the agenda is formed, how you manage the transitions and votes as Toastmaster, and who is contributing what skills to what aspects of the meeting. It will also establish a rapport with participants who will in turn be able to get into their roles at an early stage. Often we have to rely on experienced members to fill in the gaps at the last minute. Having a meeting two days after Easter, when many people have been away, does not help matters.

Paul gave us Action as word of the day and also covered Ah counter. Great natural sense of humour and had the listening skills to pick out many examples of that words use. With practice he will get more sensitive to the use of language picking out memorable or inappropriate words. It is harder to do than it seems because it is so easy to be immersed into people’s speeches that you are no longer a detached observer.

In terms of facilitation the main input after getting evaluators lined up was checking everyone was comfortable and clear about their roles. I offered evaluations to all those in a role that could be evaluated. One had their manual and we soon found an evaluator. One didn’t want an evaluation, but three did and had left their manuals at home. I offered to do them if they could get they manual to me within the week.

It is harder than it seem to get members bedded down into engaging with the leadership track. In the history of Toastmasters the leadership track is newer in general that the communication track and currently subject to a rethink and redevelopment. Many clubs struggle to get adequate engagement. There is advice for improving that on the Toastmaster International website.  http://www.toastmasters.org/Members/MemberExperience/EducationalProgram/10TipsCLProgram.aspx

It occurred to me today that development of speaking and evaluating skills follows a pattern. First to develop is the content, then comes structure and finally the mental effort can focus on delivery. It is very much a challenge for me to ensure delivery gets enough attention and too need to distil down my notes sooner and give the delivery more flourish.

On Monday I am also “General Evaluator” for Northampton Speakers