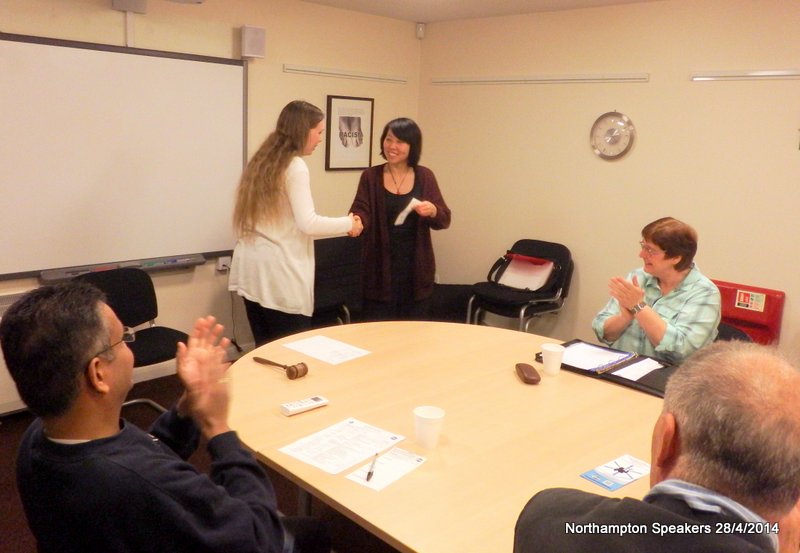 Four Toastmasters and four welcome guest gathered in the board room at Billing road for a fun night. Awards went to Josie for a début win with table topics and Daniel won humour. Next meeting is 19th of May at 53 Billing road, Northampton, with Daniel as Toastmaster-of-the-Evening.

Sue revisited her icebreaker with a talk entitle “dance as if no one is watching you”. She told a lively tale of being cajoled into ballet because it was pink to find that she actually liked country dancing, but that ballet had an unexpected virtue later in life with fencing.

Topic-master Dave recalled his recent holidays to Hastings and wondered about other people’s holidays:

Many thanks for Dave who evaluated Sue’s speech and to Lynda who, given no real notice, managed to meaningfully evaluate all 7 table-topic participants within 5 minutes. Lynda also provided light entertainments with a 5 minute quiz around 20th-21st century years ending in 4 and chaired the meeting as Toastmaster-of-the-Evening. In addition to re-presenting her icebreaker, Sue was President and co-Timekeeper.  The other co-Timekeeper was Daniel who also acted as General Evaluator.

Overall we did well, drawing on experience, to drive a fun meeting forward given surprises against plan and other character forming features. Well done to all the guest who each were quite happy to get stuck in to table topics.

In that light Daniel needed to stop his mind wandering between roles and the speaking and stay focussed on the timing. Finding a second recommendation would have gilded the lily on  Dave’s evaluation. Lynda pulled off an amazing feat of evaluation that just needed a polish to distil down to one key commendation and recommendation per person.

The meeting as a whole would have benefited with closer communications between participants to better anticipate when speakers might have difficulty attending. Pro-active new member mentor-ship and the progressive implementation of the meeting management website for the club will help shorten the lines of communication. Moving table topics ahead of speeches in the agenda would give a temporal and a mental buffer against speakers that are late or can’t make it, allowing for a prompter meeting and a chance to come up with plan B on the night.

The final reflective message was that attendance and other surprises are a feature of most clubs, and especially a prospective club. By staying positive and being creative we will maximise the generation goodwill and fun at every meeting, sending that out into the community at the end of the night.

I enjoyed myself a lot tonight, learned much more and met great people.