This talk is directed at the eight project in the competent communicator manual “Get Comfortable With Visual Aids”.

One of my interests and activities is modern partner dance to ‘pop’ular music in the western world. The Blues is a progenitor of this modern music scene, but it is often misunderstood by casual listeners who take away only the apparent negativism of its downward feel. With the use of audio visual aids I will endeavour to provide a greater and richer appreciation of the Blues.

Does it strike you as odd that party goers can be living life to the full and yet the music be a Blues laden with the dismay of living? This and other intrigues crossed my mind twelve years ago when my wife and I first came across Nigel and Nina  who were pioneering Blues dance to the modern-jive social partner dance scene in the UK. If you watch Nina she dances with a near balletic grace! She is a trained ballerina. However, let’s listen to what they are dancing to. It is Popa Chubby’s song Sweat 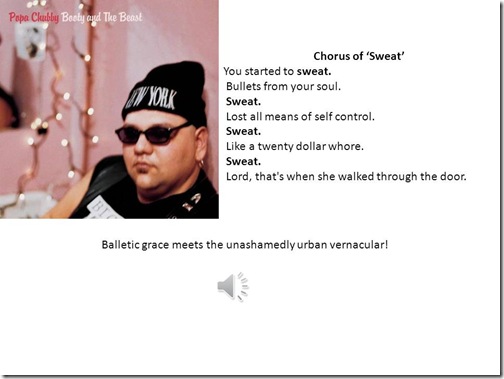 The paradox is obvious

Toastmaster, fellow toastmasters and most welcome guests I will use the next few minutes to try to enlighten you about the paradox of stomping on the Blues, giving you some idea of the music, but also the social side. 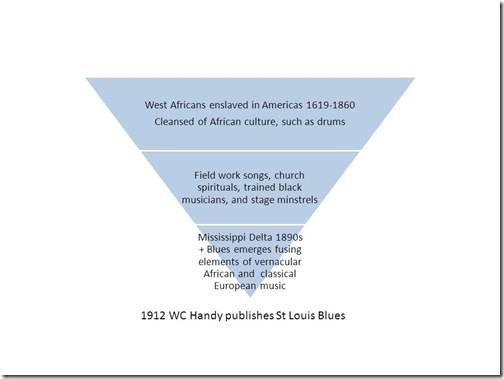 The Blues emerged 120 years ago in the Mississippi Delta in America amongst African American communities. West African culture had been ‘cleansed’ during slavery, but music and dance are too deeply embedded. Drums are banned, but field work songs with their caller and chorus are OK, as is singing the spirituals at church, and very rarely a party.

Some are trained as classical music and dancing minstrels to entertain the owners. Mimicking mockery is the first step to a fusion of cultures

Caller: All them pretty gals will be there,
All: Shuck that corn before you eat;

They will fix it for us rare,
Shuck that corn before you eat 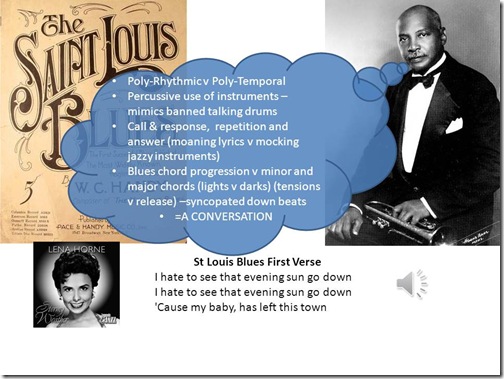 It was 1912 when WC Handy published the first commercially successful Blues. It inherits instrumentation from Europe, but percussive polyrhythmic structure from Africa together with the call and response of work songs as well as the mimicking and mocking attitude. In classical music timing is the expressive element, hence the conductor, with Blues it is rhythms.

If we listen to Lena Horne sing the St Louis Blues you should hear or feel the vocalist and the instruments all telling their own different stories. The story line is an abandoned homeless wife facing yet another night alone on the cold hard streets. 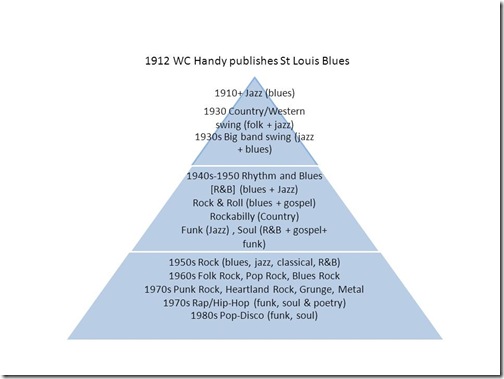 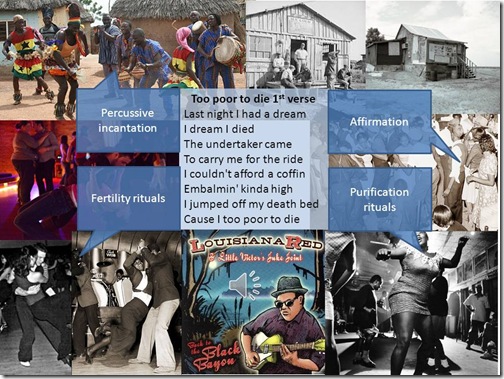 Blues, Booze and Babes or Boys. These are some of the elements at play during social dance. Life has that habit of leaving us raw to the emotional pain of our existential vulnerability and lonliness. Stomping on the Blues is an antidote allowing people to escape the moment, to mock the moment, to share the moment. Listening to Louisiana Red’s “Too poor to die” the absurdity of life is clear.

Anything going wrong is a Blues song in-waiting. However, bluesman Son House takes a stronger line restricting Blues to the discord between male and female who are supposedly loving of each other because their Blues is a mean killer. The “Top rate tax band Blues” far less so. Ninety percent of Western popular music typically contains reproductive messages. 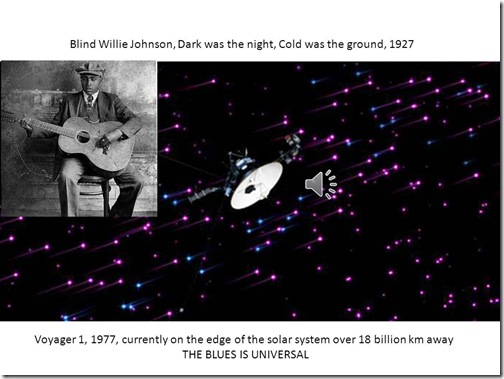 Toastmasters, the theme of tonight’s meeting is Wonders of the Universe. 18 billion km away there is a copy of a Blues on Voyager 1, the earth’s first inter stellar mission. Should Aliens discover this, I hope they, like you, begin to see the richness of culture and history that is embedded within it, and leading from it. Will they hear the echoes of the talking drums, the call and response of the work songs, the empathy and mockery of life’s absurdity, and above all will they shake their bootys and thangs? Thank You

Six tracks to entertain during the network break 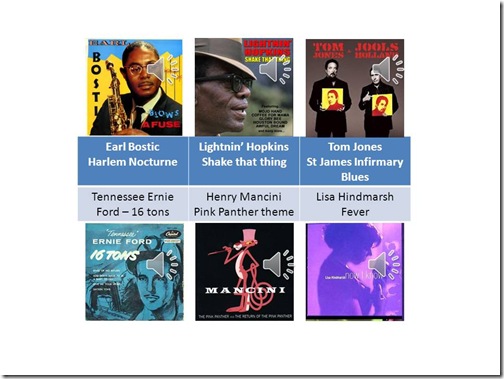 The Powerpoint slide show is available on slideshare
Project 8: A Blues Primer from Daniel Sandars